Back into the fashion forward mainstream, Skechers have re-emerged as a major player in footwear.

Along with an uptick in interest amongst a new generation, buyers have noticed an uptick in prices for Skechers, and can’t quite put their finger on why Skechers are so expensive.

Why Are Skechers So Expensive In 2023?

Skechers has almost the exact same price range as its competitors, while still carrying some residual brand awareness of being cheap or inexpensive. Through its delivery of athletic shoes focused on performance, comfort, and support, coupled with Skechers rise in widespread fashion acclaim, the prices of Skechers are indicative of the market itself.

Do you want to dig a little deeper into why Skechers are so expensive? If so, continue reading to gain further insight and answers to questions you may not have even considered beforehand!

How Much Do Skechers Cost?

Skechers prices range from $25 to $200 in both mens and womens sizes, while children’s Skechers are priced between $35 and $65.

Frequently offering sales and deals in exchange for your email address and spam-like promotional emails, it’s not impossible to catch a deal on your favorite sneakers through the company website.

Comparatively to its competitors like Nike (pricing ranging from $25 to $295) and New Balance (from $28 to $229), Skechers is marginally lower in price range.

However, it still holds the public perception of being a bargain brand shoe.

Skechers is a leader of the 91 million dollar industry of shoewear. How the company views itself in this market reflects in the pricing.

How Does Skechers Price Its Product?

As most apparel and footwear companies do, Skechers marks its prices up from the cost of production.

For example, a pair of Skechers that cost $70 in the store or online actually cost about $15 to make.

Skechers outsources production to China and Vietnam, where manufacturing costs are largely cheaper than in America.

The incentive here is to generate more profit with a higher retail markup without changing the quality of the shoes that appeal to the pockets of the owners.

Quality is not affected by using third party manufacturers in Asia.

In fact, this helps with meeting the demands of the consumer, growing the business, and delivering those $60 dinosaur light up shoes to children.

Are Skechers Any Good?

Skechers quality is a point of discussion between buyers, podiatrists, and strong opposers of the brand as a whole. Depending who you ask, you may get a different answer.

Specific styles like Skechers Arch Fit have been upheld by podiatrists as helpful for issues of plantar fasciitis (flat feet).

Boastingly citing their shoes as “Podiatrist Certified,” some podiatrists have put this claim to the test by reviewing Skechers themselves.

The more flexibility the bottom of the shoe has, the worse the shoes are for your feet over the duration of time. Unfortunately, most Skechers have an extremely flexible base.

What Are the Benefits of Wearing Skechers? 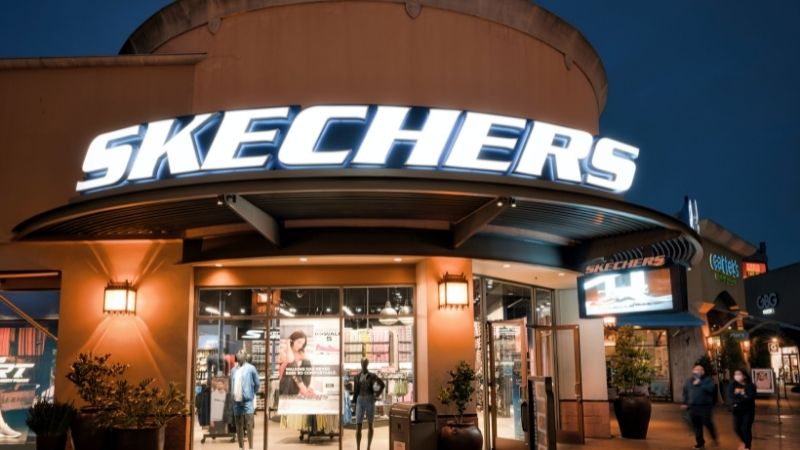 Promising fashion and functionality, Skechers has made good on this selling point with quantifiable benefits of wearing shoes based on customer reviews.

When Skechers initially fell out of mainstream style, the company shifted the brand to one on performance, ease of wear, and performance.

This is why most associate Skechers as a great option for walking shoes.

Is Skechers a Good Brand?

Skechers is a trusted brand that has kept its company alive and kicking for decades with its strong customer loyalty. Simultaneously, Skechers is not universally applauded for its shoes.

Those who love Skechers go out and buy more to add to their collection or replace those that are lovingly worn in already.

Understandably, with every positive remark, there is a negative remark.

Therefore, the results and reviews on whether Skechers is a good brand can be contradicting, and highly depend on your experience.

Advisedly, apply what you have learned from this article, and check out a pair of Skechers at a local retail store. The most impactful insight can be gained through firsthand experience.

There was a time when Skechers were considered cheap and out of style.

Today, the prices are on par with the athletic footwear companies we have been eagerly overpaying for products like Nike, Adidas, and New Balance.

Sitting at number three on the list of most successful athletic footwear brands in the world, Skechers has reflected this status through increased pricing and visibility.

With a revival in interest based in 90’s nostalgia, if you are seen wearing Skechers, it’s unlikely that anyone would call you out on it based on “cheapness.”

What Is the Most Expensive Pair Skechers?

The most expensive Skechers for men and women are the Skechers GOrun Speed Freek priced at $200. Running and walking shoes are the highest priced Skechers on the website.

In short, Skechers are expensive because of the quality of the shoes in the areas of performance, style, and the considerable profit margins of outsourcing production.

Skechers is a brand that sees its greatest peaks of sales while the shoes are on trend, and the company capitalizes on that accordingly.