Converse has, over the years, made a name for itself as one of the most iconic footwear brands in the fashion industry, with many shoe factories globally.

But, one question that keeps popping up among Converse lovers is where this classic yet trendy shoe comes from. So, where are Converse shoes made? I did extensive research about this, and this is what I discovered!

Where Are Converse Shoes Made In 2023?

Converse sneakers are made at footwear plants in Vietnam, China, India, Indonesia, Taiwan, Malaysia, Thailand, and Pakistan. These rubber-soled canvas or leather shoes were initially manufactured in the United States of America until Converse Company was declared bankrupt in 2001. Nike, Inc. purchased the classic footwear brand in 2003 and has since manufactured the shoes in Asian countries.

To learn more about where Converse sneakers are made, how you can spot real Converse from counterfeit, and more, keep reading for more facts!

Where Are Converse Sneakers Manufactured?

While Converse sneakers are designed in the United States, they are manufactured in shoe factories in Asia.

Converse shoes were initially made in the United States until Converse Company announced bankruptcy in 2001.

This explains why Converse shoes with the “Made in America” sewn-in label are now one of the most coveted collectors’ items.

Consequently, Nike, Inc. purchased the classic and fashionable footwear brand in 2003 and started manufacturing the sneakers in Asian countries.

Nike, Inc. has shoe factories in Thailand, Vietnam, China, India, Malaysia, Pakistan, Indonesia, and Taiwan, where these shoes are manufactured.

Despite manufacturing Converse sneakers in many countries, Converse has standardized production quality across the board to hold all the manufacturing processes to the same standard.

Therefore, you get the same level of shoe quality regardless of the store where you purchase your pair of shoes or the country they’re manufactured in.

Nevertheless, Converse shoes are made with high quality and tough canvas or leather outer, rubber outsoles, and metal eyelets in shoe factories in Asia.

Are Genuine Converse Shoes Made in China?

Converse sneakers manufactured in China are original and genuine, provided they’re made in a Converse factory in the country.

Besides China, the Converse footwear brand also manufactures most of its genuine shoes in Vietnam.

Many Chinese footwear factories are renowned for producing fake Converse shoes made from low-quality and substandard materials.

Therefore, it’s impossible to check whether a pair of Converse shoes are genuine or not by just looking at the country where they’re made.

It’s essential to purchase your Converse shoes from a reputable footwear retailer or from the Converse official website to avoid buying knockoffs made in China.

In addition, you can look out for the common red signs that counterfeiters leave behind to tell real Converse from fake (See More Below).

Are All Converse Shoes Made in Vietnam? 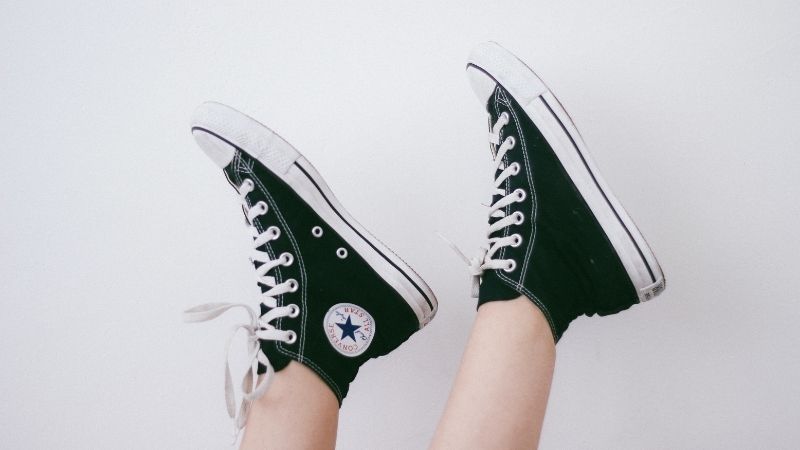 All Converse sneakers aren’t made in Vietnam.

Besides Vietnam, Converse has shoe factories for making these rubber-soled sneakers in China, India, and Indonesia, among other Asian countries.

However, it’s important to point out that most Converse shoes are made in shoe factories based in Vietnam since the country has low production costs.

Thus, more often than not, a wide array of genuine and original Converse sneakers come from Vietnam.

If you come across a pair of Converse shoes with the “Made in Vietnam” sewn-in label, the chances are that they’re genuine sneakers.

How Can You Tell Real Converse From Fake?

More and more low-quality counterfeit shoes are being introduced into the fashion industry daily.

While some Converse lovers may rejoice in their affordable prices, they don’t get a return on their investment, since counterfeit sneakers are made of low-quality materials.

Counterfeiters have become so advanced that many experts have trouble determining which Converse shoes are genuine and which are not.

Luckily, there are effective ways to tell real Converse shoes from the counterfeit sneakers, which include:

One effective way of telling between a counterfeit and a genuine pair of Converse sneakers is by looking at the packaging box that the shoes come in.

Genuine Converse shoes come in a clearly labeled black Converse packaging box with brown stripes at the bottom and the company’s signature logo on the top, front, and right side.

More so, the black box comes with the shoes’ display information such as size, color, style, and a QR code and a barcode.

Thus, if you come across Converse sneakers with no typical sign of new or fresh shoes, the chances are they’re counterfeit.

2. Quality of the Logo Patch

All real Chucks come stamped with a clean printed round patch on the inner ankle or the tongue of the footwear, mostly with a navy blue star and the Chuck Taylor’s signature.

Thus, if you find Converse shoes whose logo patches are located on the outer ankle of the boots, they’re fake.

Nonetheless, it’s worth noting that Converse shoes come in various colors and styles. Therefore, the patch doesn’t always come in blue and is sometimes made from rubber.

Therefore, be cautious of Converse shoes whose emblems have different words and design elements from the real logo features and aren’t clear.

3. Look at the Trademark

Converse shoes manufactured before 2008 have come with the ® symbol on their All-Star logo.

Therefore, if you come across Converse sneakers manufactured after 2008 with the symbol, that could be a red sign that the shoes are counterfeit.

In addition, look at the quality of the stitched logo on the Converse shoes to determine whether a pair of these sneakers is genuine.

If you notice a patchy or unclear logo, that pair is fake.

In hindsight, most Converse sneakers are made in Vietnam, China, India, Thailand, Indonesia, Taiwan, and Pakistan due to reduced production costs in these countries.

Thus, determining whether Converse shoes are genuine or not by just looking at their origin country would be useless and futile. Fortunately, the tips outlined above will help you pick the right shoes.