Crocs is one of the most popular shoe brands currently available, but have you ever wondered when they came out?

Learning about your favorite footwear is important, so if you want to find out when Crocs came out, I have done the research, and this is what I found!

When Did Crocs Come Out?

Crocs released its first 200 pairs of shoes in 2001. These pairs were unveiled in Florida at the Fort Lauderdale boat show and sold out immediately. Initially, Crocs were meant to be boating shoes because of several features such as the grip and waterproof sole. Crocs have since collaborated with several celebrities to create multiple models

If you want to learn more about when the different models of Crocs were released, keep reading for more useful and interesting facts!

What Was Crocs First-Ever Shoe Called?

The first set of Crocs that was released was called the Beach. Although they were originally designed to be worn by boaters, other people joined the bandwagon.

Apparently, features such as water-proof soles, grip, and adequate foot protection made the Crocs brand popular.

Who Made Crocs Popular?

One of the first people that made Crocs popular was Christopher Kane, an important fashion designer and icon.

He featured Crocs in his spring/summer 2017 runway, which made an impact on the fashion industry.

Immediately after this showcase, the sales of Crocs improved, and many began to wear them.

Aside from this incredible moment, Crocs became popular for several reasons, such as their level of comfort, aesthetics, and how easy the shoes are to maintain.

Overall, Crocs shoes are extremely versatile, which has contributed tremendously to their popularity.

In fact, since 2017, there have been so many models of Crocs on the market that it can be difficult to keep up with the exact amount!

When Did Platform Crocs Come Out?

Platform Crocs came out in October of 2017, which was a release in collaboration with Balenciaga.

The Platform Crocs were unveiled in Paris during a fashion show, which caused a bit of controversy.

There were many mixed feelings from the audience and important personalities in the fashion industry.

While some people appreciated the vision, others thought it was done for the wrong reason.

Nevertheless, the Platform Crocs sold out in record time, and the demand has been quite impressive.

The Platform Crocs were first released in two colors- pink and toast. However, you can now purchase these shoes in black and yellow.

Two types of Platform Crocs exist- embellished and regular models. Depending on your budget, you can shop for either model on the company website.

When Did Bad Bunny Crocs Come Out? 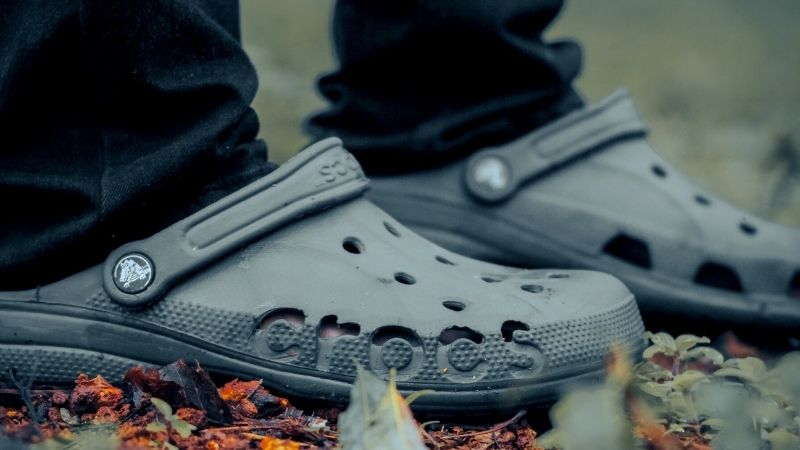 Bad Bunny Crocs were released in September of 2020.

There are so many reasons to love these Crocs, but the main reasons are the glow-in-the-dark jibbitz charms and the Bad Bunny logo present on the shoe design.

Impressive and highly anticipated, this collaboration did not fail to disappoint. After all, Bad Bunny was a huge sensation at the time and had a huge following.

In fact, this collaboration was so successful that the Bad Bunny Crocs sold out in only 16 minutes!

As the demand for the Bad Bunny Crocs increased, so did the price. As a result, the initial price tripled on resale sites just hours after its release.

Post Malone’s Crocs were released in November of 2018 and sold out fast.

These Crocs featured six custom-designed jibbitz charms, one of which was the recreation of the rapper’s famous tattoo “stay away.”

Since many fans had been anticipating the release, Post Malone Crocs sold out in 24 hours. Post Malone’s second collaboration with Crocs also didn’t do badly in sales.

The yellow Crocs with barbed wire designs sold out in 30 minutes with fans demanding more. It slowly became the standard for the subsequent Post Malone x Crocs collaboration.

Thanks to the impressive sales, Crocs and Post Malone decided to collaborate again. So far, there have been 5 Post Malone Crocs series.

Each design in this Crocs series has received incredible feedback, and it prompted the superstar to give back.

To kick off the release of the 5th series, the Post Malone x Crocs Duet Max Clog II, Post Malone gave out 5,000 pairs to his fans, a memorable way of saying thank you.

When Did Fuzzy Crocs Come Out?

The fuzzy Crocs were released in November of 2021 just in time for winter, and they have been a big hit.

Similar to other Crocs, these shoes are cozier, and perfect for an evening at home.

Although the line is filled with cozy options, the position of the fur is different.

For instance, the Classic Fur Sure shoe is a lined clog with fuzzy Sherpa on the outside, while Fur Sure Sandal has removable pom-poms on the top.

These varieties are one of the reasons why the fuzzy Crocs line has become so popular. Plus, they are available in many fun colors, so you can shop for them in your favorite options.

Are Crocs Fashionable in 2022?

Crocs have come a long way, and they are still fashionable in 2022. While some people are not so enthusiastic about the shape, there are just too many benefits from these shoes to ignore.

From how comfortable they are to their aesthetics, it’s clear there will always be a demand for Crocs

Not to mention, last year, the sales of Crocs increased tremendously thanks to the Instagram posts by Nicki Minaj.

As well, celebrities such as Kendall endorse Crocs, fixating them in the entertainment industry overall.

Crocs shoes were released in 2001 and gained a resurgence of popularity in 2017, due to several celebrity endorsements. Public figures such as Christopher Kane, Post Malone, Nicki Minaj, and many others have been sporting Crocs shoes at events and on social media, giving the shoe brand a larger foot in the door in regards to fashion trends.